Thanks to the good folks of Quirk Books, I got to spend a few hours yesterday at Book Expo America, where I signed a bunch of books, shook hands with some of the very nice people who have read and enjoyed The Last Policeman, and then wandered around New York City’s massive Javits Center in a book-nerd daze, noting repeatedly how many new books there are I want to read; how there are still so many old books I want to read before I die; and how, generally, there isn’t nearly the time in life to do all the things you want to. (I swear not all of my thought-trains lead so rapidly to the grave.) There is a very brief scene in my new book, Countdown City—the one I was signing at BEA—in which people facing the impending apocalypse are spotted in a college library, hunkered down in carrels before giant stacks of books, growing out their beards and urinating in cups and reading and reading and reading as much as they can before the end.

I have to start remembering, when people ask, “If the situation you’ve invented were real, what would you do,” to reference that little scene. That’s totally what I would do—because even if I do get lucky and get to stumble through another five decades or so, there’s no way I’ll get to read all I want to.

Like, for example, I just read The Cut, by George Pelecanos, a crime novelist I’ve been meaning to read for about five years, and then I was raving about the simple beauty of this novel to a friend—Dan Barden, himself a great writer—who goes, “Well, The Cut isn’t even one of his best.” So now I have to read everything Pelecanos ever wrote. Along with the dozens of other writers I haven’t even begun yet; I’m afraid to try Anthony Trollope, for fear that I’ll love him, and have to read all forty-seven—literally, forty-seven—of his novels.

Anyhoo, so, BEA. This is Quirk digital guru Eric Smith’s “Vine” of the signing (a sign Vine), including a shot of me standing uncomfortably, i.e. the only way I know how to stand:

And these are a couple regular old pictures: 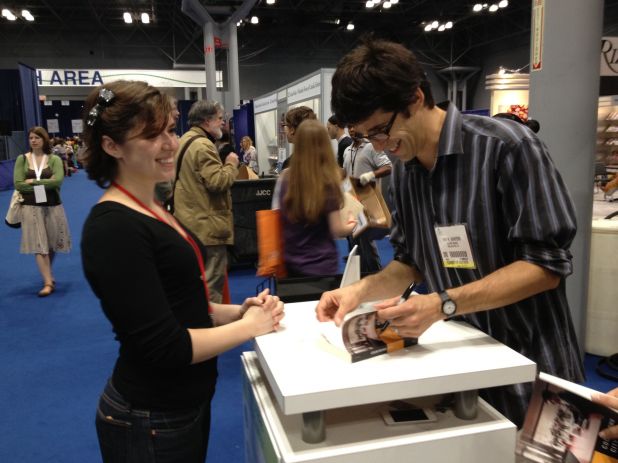 To next see me in action, be in Indianapolis on July 16 at Big Hat Books. For the rest of the appearances, see the Appearances page.