[The book comes out today (July 5). This is an interview from the publishing trade paper Kirkus Reviews] 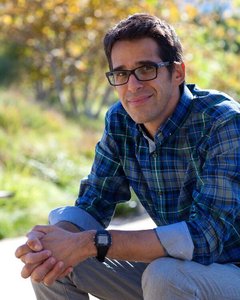 Author of UNDERGROUND AIRLINES
Interviewed by Benjamin Rybeck on July 4, 2016
Ben H. Winters is white, and the narrator of his new novel, Underground Airlines, is not. In fact, the narrator, Victor, is African-American, an ex-slave in a contemporary version of the United States with a speculative-fiction twist: the Civil War never happened, meaning that slavery is still legal (in portions of the country, anyway). Victor is a bounty hunter tasked with finding runaway slaves, which puts him in an understandably awkward (if that understatement will do here) position: he uses his race to ingratiate himself into the lives of other African-Americans whom he will eventually betray. This leads the character—and the novel—toward much soul-searching about what it means to be black in America. And once again, Ben H. Winters is white.How do you feel about this basic fact of Underground Airlines? I ask, in part, because this issue arose in a conversation I recently had with a white bookseller who felt uncomfortable recommending the book in a store newsletter because of the author’s—and the bookseller’s own—race. This is a version of an old question that haunts writers: how do you gain the authority to tell the story you’re telling? And, in this particular case: can a white author create a convincing portrait of what it feels like to be in the head of a man who experiences racism every day? This question—at once complicated and attention-grabbing—is one I imagine Winters will get asked a lot as Underground Airlines enters the world. And here I am, myself a white bookseller and author, asking it.

“I approach the possibility of concern with great respect and humility,” Winters tells me, “and with an understanding that there has been a history of white artists appropriating black voices and black works for their own ends. All I can do is stand behind the work.” For Winters, Underground Airlines comes from a place of empathy rather than exploitation. “I hope people will see that my intentions are good,” Winters says. Then he pauses. “Also,” he adds, “intentions aren’t necessarily enough.”

What were those intentions? Well, it helps to understand where Winters was coming from at the time he began Underground Airlines. He had just finished the Last Policemantrilogy, in which he used the trappings of genre fiction to explore broader philosophical ideas—something he felt very proud of. As he wrote Underground Airlines—which takes the form of a mystery novel, with Victor a sort of hard-boiled detective—he was thinking about the deaths of Trayvon Martin, Michael Brown, and numerous other victims of racially motivated violence. “We forget how close we still are to slavery,” Winters says. “I thought I would take a metaphorical idea—that slavery is still with us—and transform it through fiction into a literal idea.”

On a craft level, this is an interesting aspect of Underground Airlines: Victor is a narrator who seems forthcoming with the reader while also donning so many different guises that he himself becomes unclear about who he really is. When I ask Winters about this, he tells me, of course, it’s a fun challenge; but, with the book barely into the world, he also seems attached to Victor in a way far more fundamental than issues of craft. “I love this character so much,” Winters tells me. “I love him, I love him.”

Winters does have his own personal connection to prejudice. “I had ancestors who were Jews in Czechoslovakia in the 1940s, and you always needed to have your papers on you.” This notion of papers shows up throughout Underground Airlines—Victor frequently has to show his own, proving he’s a free man—and I thought about another piece of recent history, especially potent to me a few years ago when I was living in Arizona: the passage of SB 1070, giving authorities the right to stop you and ask for identification if you seem like you might not be a citizen. Of course, how to judge this? Well, let’s say the law, in a state along the Mexico border, did not target many white people who were maybe in the United States illegally from, say, Sweden.

For Winters, all these forms of prejudice are connected, and Underground Airlines, in that sense, becomes more than just a book about one particular race. “We can be so proud of this country,” Winters says, “but we can’t pretend its legacy doesn’t also include generations of violence and subjugation, and we can’t pretend those things aren’t still playing out.” For evidence of this, he looks no further than our current election cycle, which “is demonstrating to us vividly how close to the surface racial animosity is.”

So, again, those good intentions? “I wanted to explore a painful history and a painful present. And I wanted to ask white readers to think about these things as deeply as black people are forced to think about them.” He acknowledges that he can, in the abstract, be outraged by racism but that he will never know the feeling of being subjected to it. But for him, “part of the idea of fiction is living in somebody else’s shoes for a while—or trying to.” At the end, he hopes that somebody reading Underground Airlines “will have something akin to the experience I had [writing it], which is this: as much as I thought I knew about my nation’s history and the pervasiveness of racism in our present day, I had a lot to learn.” Through writing the book, he discovered a level of engagement he hadn’t previously had. “I found it very moving,” he tells me.

An example of how Winters literalizes this idea is the way Victor has to move through Indianapolis on his mission to find a mysterious runaway named Jackdaw. He has disguises and fake identities; he becomes different people depending on whom he’s talking to. This is a familiar convention in detective fiction, but in a racially charged context, it takes on a deeper level. Winters mentions the term “code-switching,” invoking Ralph Ellison’s Invisible Man, a novel “explicitly about what it takes, in terms of shifting identities, to live as an African American in this country.” Here, the disguises and fake identities are not merely generic tropes; they are essential to Victor’s survival.

2 thoughts on “interview with Kirkus Reviews”